Since GNOME 3.0 was released in 2011, there have been many in the Linux community who have pilloried GNOME developers for losing their way. While I do not agree with all of the design/development choices made 1, in general I have been happy with GNOME 3. 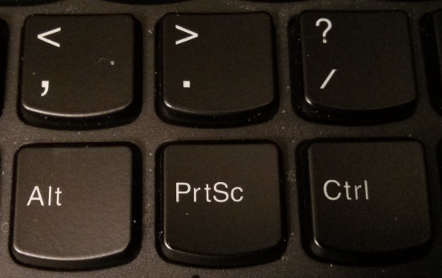 One recurring issue I have had is with screenshots. Like Windows, GNOME takes a screenshot when you hit the Print Screen key on your keyboard. GNOME will also automatically save the screenshot to an image file on your hard drive.2 Unfortunately, since my ThinkPad X230 has its Print Screen key (PrtSc; see image) placed directly below the period key, I often mistakenly press it when I am trying to end sentences or insert right brackets. This would not be an issue, except for the fact that screenshots are saved by default in the Pictures folder, which contains 80 GB+ of RAW images, whose thumbnails take several seconds to render each time I open the folder. Deleting the errant screenshot would take 30 seconds instead of 3.

The simplest fix I could think of was moving the screenshots to a different directory. In older versions of GNOME 3, this was accomplished by editing gnome-screenshot's dconf configuration.

However, in the runup to GNOME 3.6, it was decided that depending on gnome-screenshot to take screenshots was bad and that the shell should take care of screenshotting. Once made (during the development of GNOME 3.8), this change was not documented outside of the bug tracker and did not appear in the release notes for GNOME 3.8.

This lack of documentation caused considerable confusion. When I tried to search for different ways to change the directory that screenshots were saved, I found multiple blog posts explaining how to change dconf settings that I had already set properly. Since Gnome 3.8+ does not use gnome-screenshot, it is useless to change its settings and expect the behavior of the Print Screen key to change.

I was able to find a workaround by disabling the default keyboard shortcuts for printing screenshots and creating custom ones.

While this technique works great for taking screenshots of the entire screen and application windows, it does not work for capturing an selected area of the screen. Since manually running "gnome-screenshot -a" works fine to capture areas of the screen, I am not entirely sure what is happening.